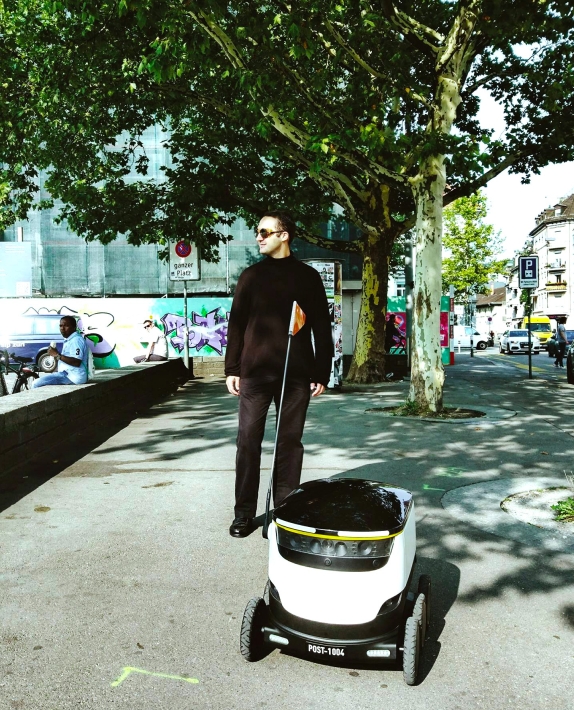 Since some weeks you can spot robots on a the streets of Central Zurich robots. This new technology is being tested by Post AG, the national postal service of Switzerland, with renowned robots made by Starship Technologies.

In cooperation with the iconic luxury department store Jelmoli, the robots are currently offered as a free service. You can order a shirt, chocolate or a picnic basket and deliver it free of charge to the desired location in the city center (within 2 km). When the robot arrives at your location, you open the robot by means of a code sent by SMS and remove the desired packet.

The delivery robot travels on the pavement at a maximum of six kilometers per hour and can transport packages weighing up to ten kilograms. Nine cameras around the small vehicle are supposed to prevent the robot from driving onto people or colliding with a tram or bicycle.

The flexibility of it in climbing the pavement, and crossing streets is significant. It is “99 percent” autonomous with minimal human oversight, however at the moment it is still accompanied by a handler to avoid obstacles.

I personally think the robot’s appearance is elegant and futuristic, like a stretched out version of “Iron Man’s helmet”, however in no way disturbing. I could even describe it as friendly.

The feedback from the locals has been in majority positive. Here it should also be noted that the robots do not aim to replace the traditional post men. They will be more in place for delivery purposes such as food delivery, an area which they robots can disrupt and make more efficient. I am very much excited to see how they will be integrated into the existing logistics chain of Zurich.

Below I am presenting 5 artworks where robots play a central role.

Take care & write to you soon.